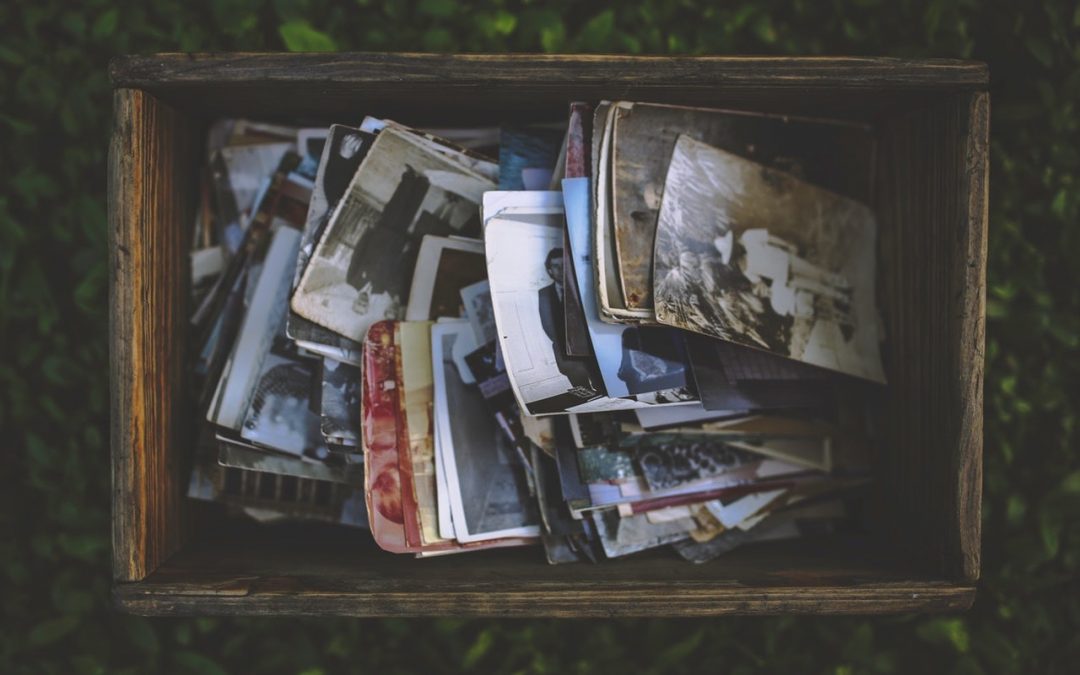 Photos make it easy to create and switch between libraries. That’s good when photos need to be kept completely separate. For instance, a real estate agent might want to keep personal photos separate from house photos taken for work. But too much separation is annoying—you have to keep switching between libraries and it’s easy to import new photos into the wrong one.

If you struggle with multiple Photos libraries never fear—you can merge them. Unfortunately, the process is slow, can require a lot of disk space and may result in the loss of some metadata. You have three options: merging through iCloud Photos, using the PowerPhotos utility, and merging by exporting and importing. Each option has pros and cons.

Apple’s iCloud Photos service offers the best solution for merging libraries. The trick is that whenever you designate a library as your System Photo Library Photos automatically uploads all images that aren’t already present adding them to the photos already in iCloud Photos. It also retains all the metadata surrounding your photos—titles, keywords, albums, facial recognition, projects and more.

On the downside, using iCloud Photos almost certainly won’t be free unless you have so few photos that the combined library will fit within the free 5 GB of iCloud space Apple gives everyone. Almost everyone will have to pay for additional storage space ($0.99 per month for 50 GB, $2.99 for 200 GB, or $9.99 for 2 TB) for at least the month in which you’re doing the merge. iCloud Photos is a good service so it’s likely worth paying for anyway.

More problematic is that the iCloud Photos way of merging will be very slow. If you haven’t already started using it, it could take a week or more to upload many thousands of photos. Plus, it will probably download the entire cloud-based collection of photos to each library whose photos you want to merge, so you may need a lot of local disk space too.

If you haven’t previously used iCloud Photos, go to System Preferences > iCloud and click the Options button next to Photo. In the dialog, select iCloud Photos. 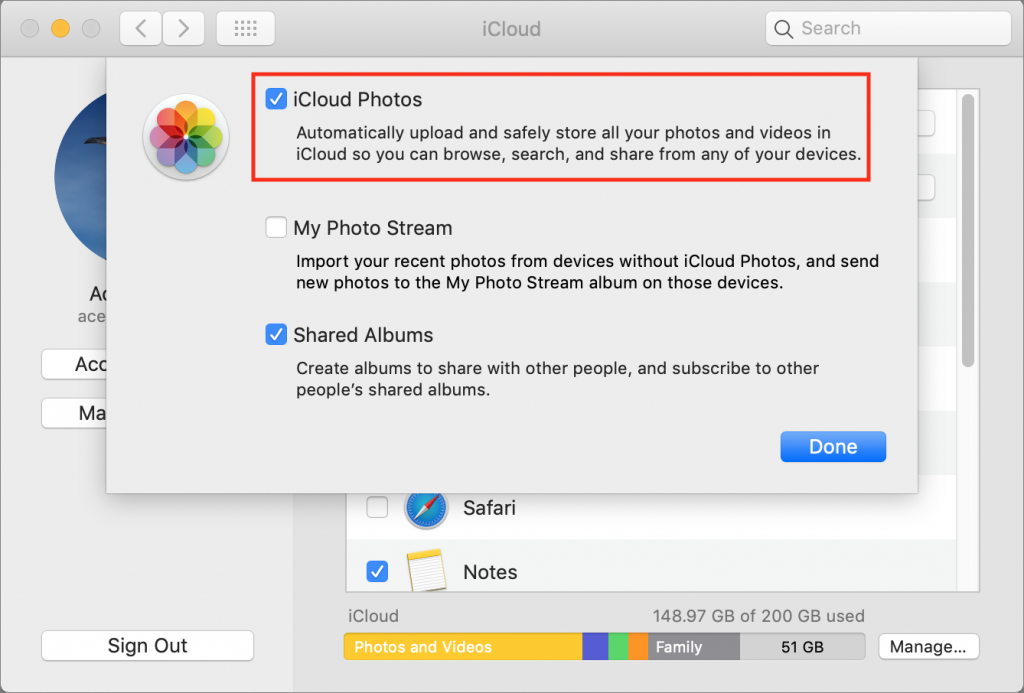 Now, starting with the smallest Photos library and working up in size follow these steps for each library you want to merge: 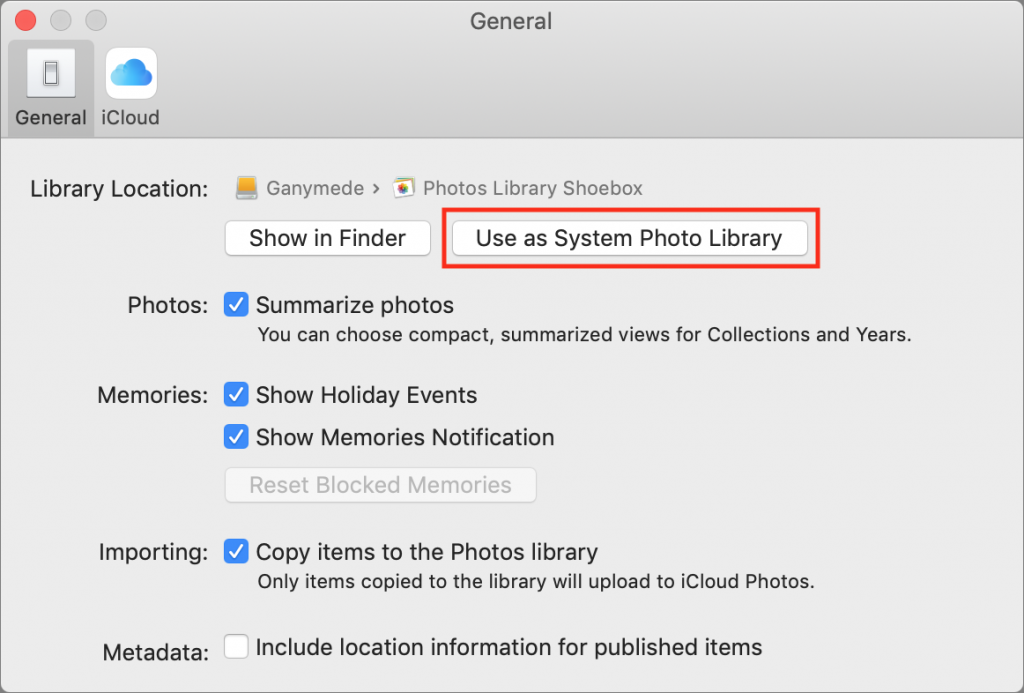 When you’re done the last Photos library becomes the one you’ll keep and you can delete the others. Needless to say, make sure you have good backups first!

The $30 PowerPhotos from Fat Cat Software provides a variety of extra capabilities when working with Photos. It helps you to create and manage multiple libraries, copy photos between libraries, find duplicates, and—most important for this topic—merge libraries.

Because PowerPhotos is working entirely on your Mac’s drive it’s fast and it doesn’t require huge amounts of extra disk space. Unfortunately, unlike the iCloud Photos approach which brings in both originals and any edits to those photos, PowerPhotos can import only your original photos or the versions that you’ve edited not both. Plus, it can’t merge facial recognition data, smart albums or print projects. 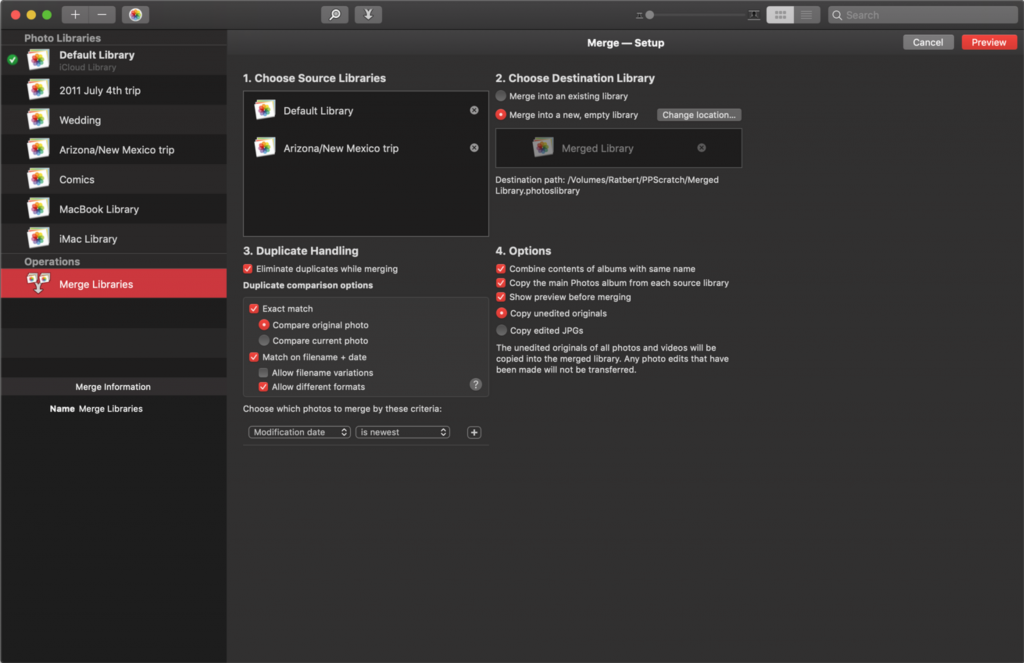 In the window that appears, you have four tasks:

Merge by Exporting and Importing

This final option is conceptually simple. You export all the photos from one library and then import them into another. (It’s even what Apple recommends.) The main thing it has going for it is that it’s free and it will be faster than the iCloud Photos approach. It could also be useful if you want to copy a subset of photos between libraries rather than merging all photos.

However, as with PowerPhotos, you have to choose between original and edited photos and you’ll need a lot of extra disk space. Even worse, you’ll lose even more metadata including albums, faces, and print projects. And if you export as JPEG, your photos may also suffer a slight quality drop as they’re recompressed.

For those who want to use this approach, Apple provides detailed instructions. In essence, you’ll click Photos in the sidebar to see everything and then choose Edit > Select All. Then you’ll choose File > Export and either Export X Photos (to get the edited versions of images) or Export Unmodified Original for X Photos (to get the original images). Once everything has exported you’ll switch libraries in Photos and then drag the folder of exported images back into Photos to import it.

Our nod goes to the iCloud Photos technique but PowerPhotos is a fine utility for those who aren’t perturbed by its limitations. Of course, don’t start any merging without making backups first and if you need help don’t hesitate to call us.